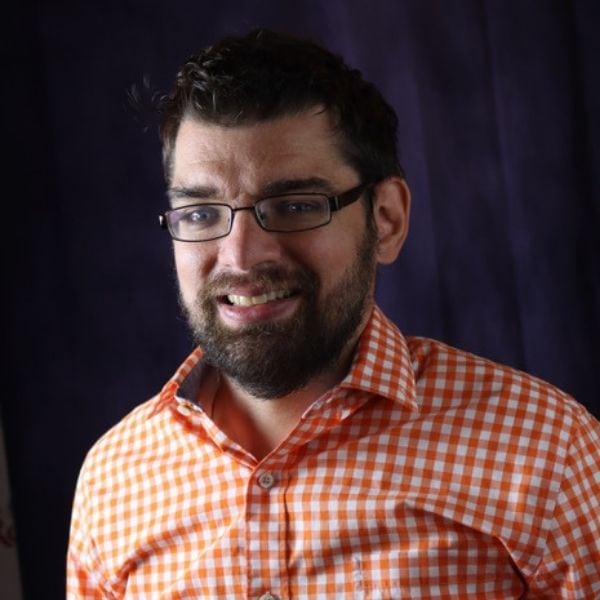 Fran Sillau (he/him/his) has worked extensively within the world of Theater For Young Audiences for over twenty years. A professional playwright, director, and producer, Fran can also be found in the classroom as a theatrical teaching artist and inclusion consultant.

Fran spent seven years collaborating with theatrical producer Deborah Denenberg (Dodger Productions and Big League Productions) on The Doll Maker’s Gift. After tracking the book author down to her home in St. Petersburg, Russia, he co-wrote the book and directed the world premiere at the Rose Theater in 2019. The Omaha World-Herald said, “Families should flock to this one.” He is currently working on his second collaboration with Ms. Denenberg, set for production in 2023.

Fran serves as the Director of Accessibility at The Rose Theater, where he is leading an expansion of the popular Every Single Child Program (a multi-layered program that serves an average of 35,000 students each year at more than 70 school buildings). The expansion will develop production and residency programming for students in self-contained special education classrooms in the Omaha area. He also directs mainstage productions at the Rose. Some of his credits include Shrek: The Musical, Go,Dog.Go! and the Omaha premiere of Hanna’s Suitcase.

Fran also serves as Executive Artistic Director of Circle Theatre, Omaha’s theater for individuals of all abilities. Under his leadership, the Circle co-commissioned My Broken Doll, a play based on the life of holocaust survivor Beatrice Karp, adapted by Ernie Nolan, and Over the River, a play about friendship by Ellen Struve. Both plays recently toured the state of Nebraska. In December of 2016, Sillau directed a regional premiere of A Charlie Brown Christmas. This production incorporated American Sign Language, shadow interpreting, audio description, as well as actors with various physical and developmental disabilities. He is also currently developing new original TYA work for the Institute For Holocaust Education.

Fran is a past Aurand Harris Fellow with The Children’s Theatre Foundation of America and a winner of The Access Grant from The John F. Kennedy Center for the Performing Arts, where he is a frequent contractor.

Fran serves as the United States representative to IIAN, a program of ASSITEJ. He also is an Emerging Leader fellow for Theater for Young Audiences USA. He holds an MFA specializing in directing and inclusion from Goddard College.

Fran works nationally as an inclusion consultant, as he is a theatre artist with a disability and a member of the GLBTQ community.