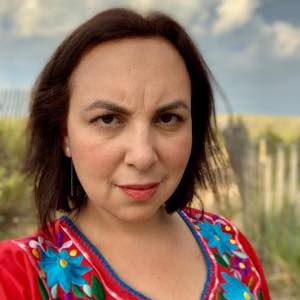 Carrie Ellman-Larsen is a born and raised New Yorker. She studied drama and psychology at NYU where she received her BFA in Drama. She attended the Stella Adler Conservatory of Acting for her conservatory training and is proud to be a classically trained actress. Carrie is now a theatre artist specializing in theatre for social change, literacy and curriculum connection through theatre. particularly forum theatre, process drama and interview based/documentary theatre. Carrie received an MA in Applied Theatre from the CUNY School of Professional Studies in 2011. She has been a teaching artist and applied theatre practitioner since 2004, working for arts organizations such asThe Theater Development Fund, The Center for Arts Education, Arts Connection, The Museum of the City of New York, People’s Theatre Project and The Roundabout Theater Company. Carrie is passionate about the way theater can be used to empower individuals and communities to rehearse and implement change in their lives and engage them to be pioneers in their own learning and growth. She hopes to continue this work both locally and globally, reaching underserved communities around the world. Carrie’s dream is to travel the world, turning people’s stories into theatre.