New York City Children’s Theater’s multi-sensory musical FIVE travels to schools and community centers in NYC each year. The show delights students with special needs and the very young (PreK–2nd grades) with catchy songs, NYC-themed videos, and sensory objects. The star of our show is Piper the Puppet, who has traveled to New York City all the way from the planet Blank to learn about his FIVE senses! Last year, over 3,000 students saw FIVE, but one class, in particular, became Piper’s biggest fans. Today their teacher, Aliza Greenberg, tells us how Piper became an overnight celebrity.

Nearly 10 months after New York City Children’s Theater visited our school with their show FIVE, Piper, a blue monster puppet and the main character of the interactive show, is still a part of our everyday lives at LearningSpring School. LearningSpring School is a K-8 school for students with autism in Manhattan. Piper has become a bit of a celebrity here.

While the experience of the show was an exciting and engaging event for my students, it is what followed that demonstrated the connection my students had to the show. The show went as planned. The actors arrived. They revealed the big, blue Piper puppet who is featured in both the videos used in the show and in person. Using their imaginations, my students journeyed with Piper through the five boroughs of New York City using their five senses to guide them. Some students were apprehensive. Overall, they participated and enjoyed the show. They asked to hug Piper when it ended. They had a wonderful time. 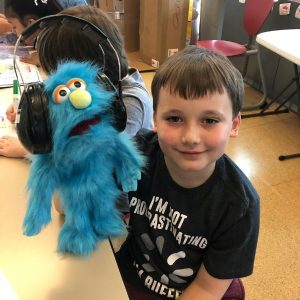 A week later, someone cut out a picture of Piper and taped him above the door to the art room. The students went wild. They pointed to him, jumping and giggling. They were so excited to be reminded of the show. New York City Children’s Theater sent us the videos used in the show. The students couldn’t wait to watch them all. They poured over every detail and sang along. We must have watched a video a day, often two, for weeks. They couldn’t get enough of FIVE and Piper.

When it came time to choose a song for the school talent show, one class chose to do the opening song with Piper. I ordered a similar blue puppet online. When the students saw this Piper puppet, they were ecstatic. Piper has become our mascot. Piper not only performed in the talent show to the song from the show, but he sat in front motivating students to do their best throughout the show.

Piper is still a fixture in our classroom. We incorporate him into our hello and goodbye songs. Piper and his videos are so calming to the students. He has become a trusted friend, an effective coping strategy, and source of pure joy. Piper has been such a gift to our school and we are so thankful to New York City Children’s Theater for bringing the show Five and its star into our lives.

Get alerts about new shows, online events, free activities and more in your inbox.